We can still observe the dominance of men over women in terms of management positions in the IT industry. However, more and more often women are showing what an important role they play in technology development.

In 2018, inspired by our desire to present unusual leaders that run IT companies, we created the Strong Women in IT initiative.

As part of this initiative, we create reports, studies, events, and webinars. These aim to spotlight female leaders and inspire others to take action.

On the 13th of October, we hosted the official premiere of the Strong Women in IT 2021 – Global Edition.

For the very first time, this report presented female leaders from all over the world.

What did the process of recruiting women for the report look like? What were the channels used for the promotion? How were the results presented?

In this case study, we go behind the scenes of the report’s creation and its promotion.

Strong Women in IT initiative

Strong Women in IT is an internal initiative of our agency. Since 2018, it has been creating new standards for the presence of women in high positions in the new technology industry.

The goal is to promote the best market practices regarding the role of women in business. We connect the women who create the world of new technologies and IT.

A “Strong Woman” is a modern, entrepreneurial woman who is consistent in pursuing her goals and dreams. Thanks to this, she achieves success no matter the adversities.

There are strong women all around the world who hold managerial positions. With them in mind, we created this year’s “Strong Women in IT 2021 – Global Edition” report.

Its goal is to showcase the entrepreneurial women who share their success stories within the study.

We care for developing the community of inspiring women all around the world. We strive to initiate global communication that helps women in their future actions and pursuit of success.

The report aims to present role models and motivate other women who are beginning their careers. In creating “Strong Women in IT” we aim to break stereotypes and old ways of thinking about women’s role in the IT team.

Preparation and execution of the project

The execution of the project began with the careful planning of all the global-scale actions by our team. We conducted the recruitment for the project via our website. This allowed candidates to fill in a set of questionnaires. Some women made an independent application. But many received nominations from colleagues and friends who see and admire their work on a daily basis. To be featured in the Strong Women in IT 2021 report, applicants had to hold a directorial position (Head, Director, C-level) in a new technology company.

As we had invited women from all over the world for the first time, proper research was necessary. So, for the needs of this project, we created a special base of potential responders. These we invited to participate either via social media or by placing the recruitment form on their company’s website. After registration closed, we began to prepare the statistical data of the report. It required further quantitative analysis as well as qualitative analysis of the participants’ responses. We also needed to create a data table based on the responses in the closed and opened questions.

To promote the project, we made use of all available communicational tools. We engaged the media, community partners, jury members, and women highlighted in the report. We also used our own channels such as social media profiles and email marketing tools. By creating special, dedicated content we kept our community updated with the process of the report’s preparation. We also encouraged observers to participate in the promotion of the initiative. They could do this by nominating women for the report, sharing social media stories, commenting, and reacting. 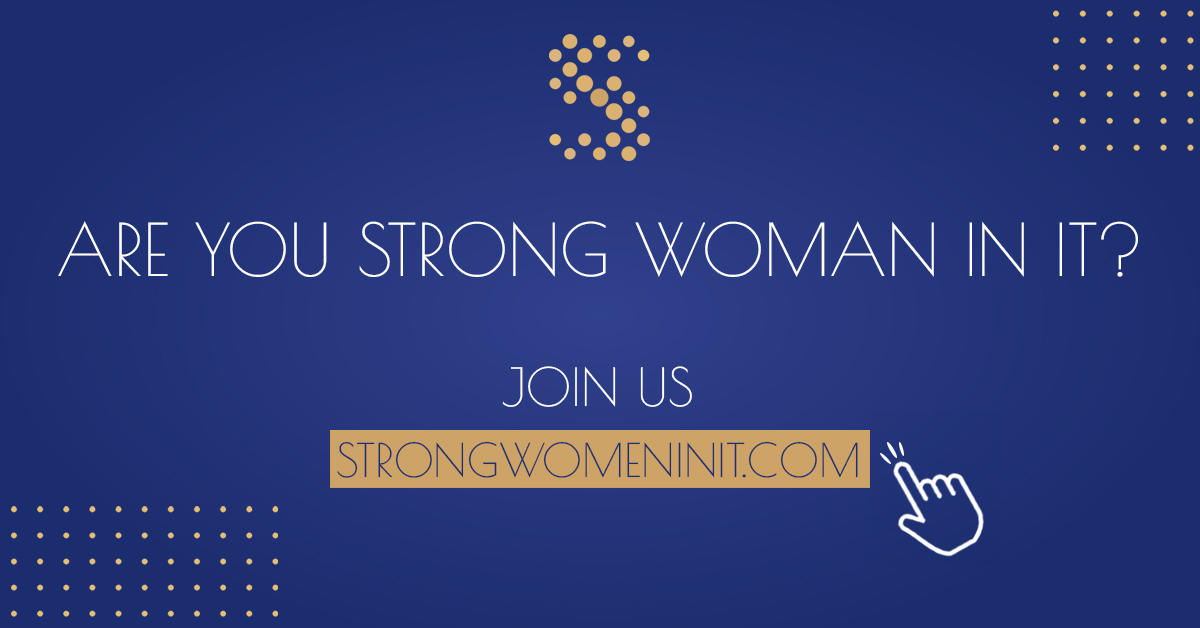 Another important aspect of the report’s promotion was contact with the media. This involved reaching out to journalists interested in women in IT themes. We created several press information packs. These presented the most important excerpts of the report – tips, trivia, statistics. The nominees themselves also took an active part in the co-creation of the press info. They expanded on their career stories and eagerly responded to the journalists’ questions. For the report to reach users all over the world, we also used various tools of performance marketing. Our team developed a strategy to promote the initiative via paid advertising on Facebook.

To meet the needs of the campaign, we created ad content and graphics in the style of the Strong Women report. The advertisements targeted women from the greatest cities in the world where technological advancement is at the highest level. This included cities such as Berlin, London, Paris, Warsaw, Tel Aviv, San Francisco, New York, and San Jose. This targeted promotion achieved great results. With a budget of only 2,000 PLN, it reached over 100,000 users and had 223,000 views! This led to registrations and nominations from women all over the world.

What was also really important for us was the engagement of the nominees. We wanted them to share the information of their nomination with their own network. To facilitate this, we prepared dedicated graphics and content for the Strong Women. We sent these out to them on the report’s publication day. The idea was met with a great response from the participating women. They’ve been sharing their nomination information both on their private and company profiles for weeks since the report’s premiere.

Another step that met with a great response was the world premiere of the report. It was held in the form of a webinar, split into 3 thematic parts.

During the webinar preparation process, we organized the technical setup on our own. We accomplished this with the help of online streaming tools such as Whereby and Stream Yard.

Hosting the meeting was the CEO of Come Creations Group and the initiator of the Strong Women in IT initiative – Anita Kijanka.

The event was split into 3 different thematic panels. The lectures discussed the development of women’s careers in the new tech industry. 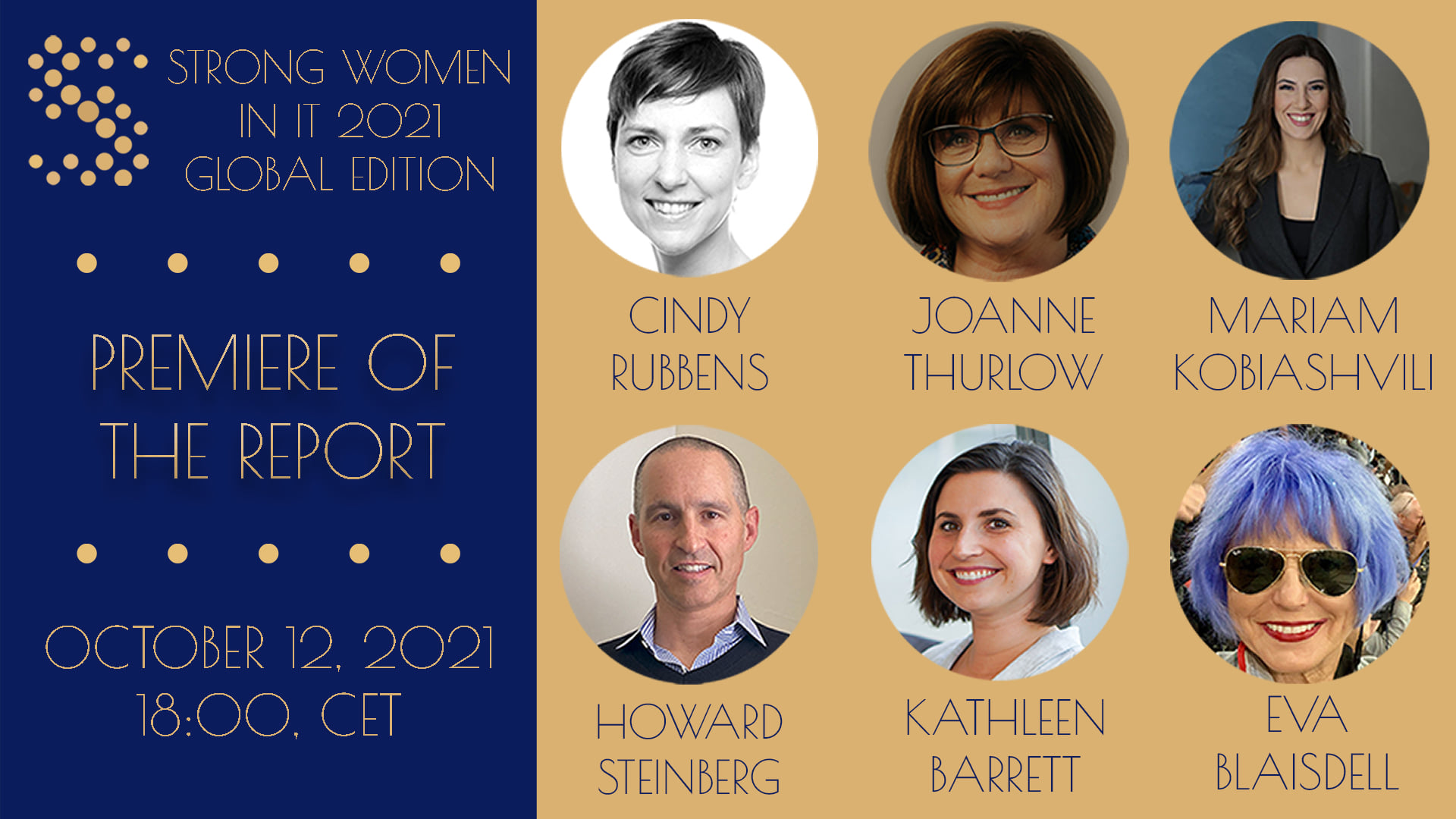 The panelists of the first two parts were the members of the jury and the women mentioned in the Strong Women report:

The star guest of the evening was Eva Blaisdell, the Lady Rocket founder of US Space, Media, and IoT fashion ventures. She is a former CEO of Compaq-HP Poland and is a Space Philanthropist. 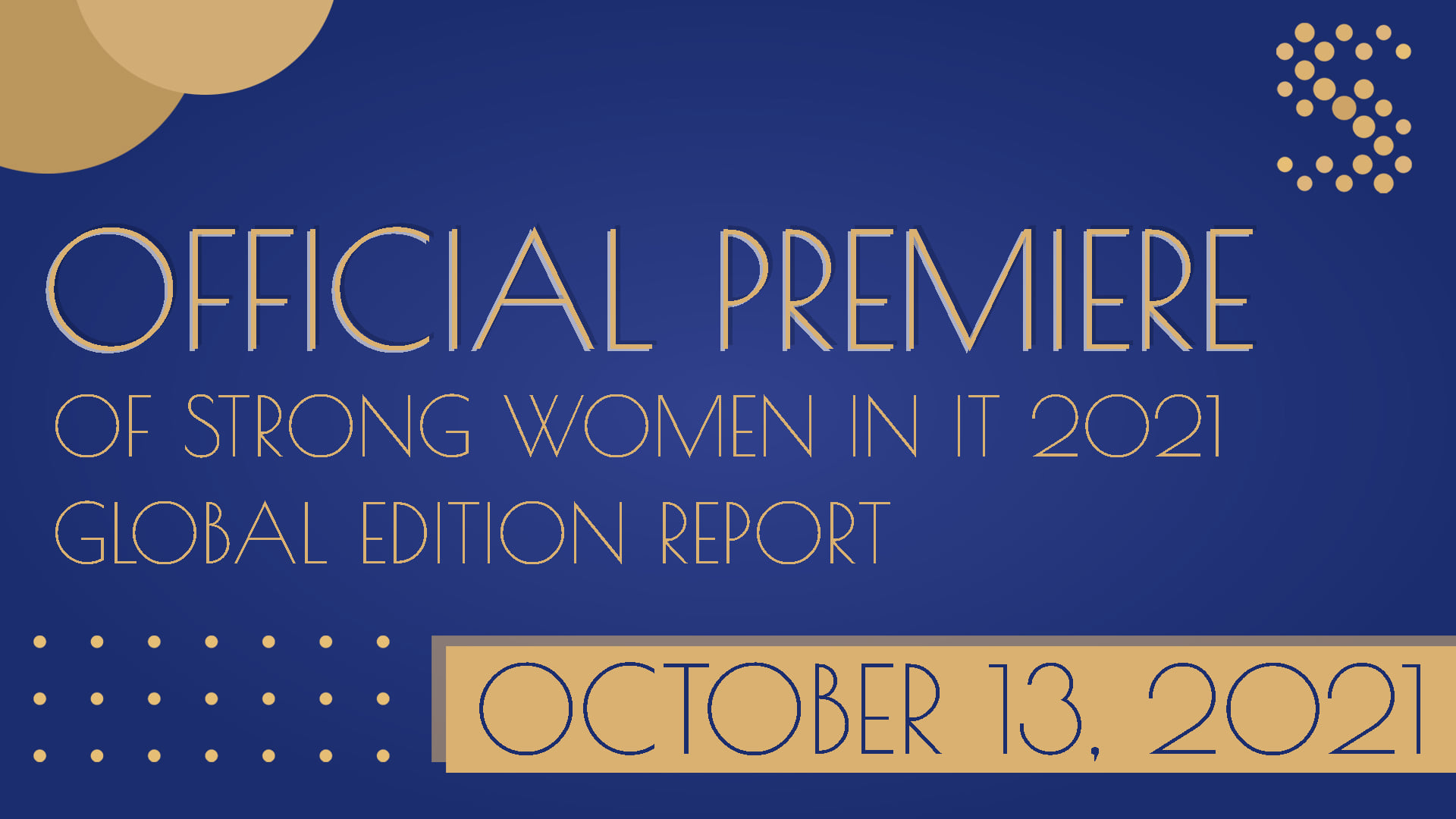 Thanks to the actions taken by our team, the result of our work is the first international edition of the Strong Women in IT 2021 – Global Edition report.

The idea drew the attention of the media. There have been numerous publications about the initiative, which has helped it to reach a wide audience.

You can read articles about the Strong Women in IT on sites like Forbes, Mam Startup, Business Woman & Life, and Brief.

Although it has been some time since the report’s premiere, there is still new information being published. This helps the Strong Women report maintain its position and the influence it has on the IT industry. 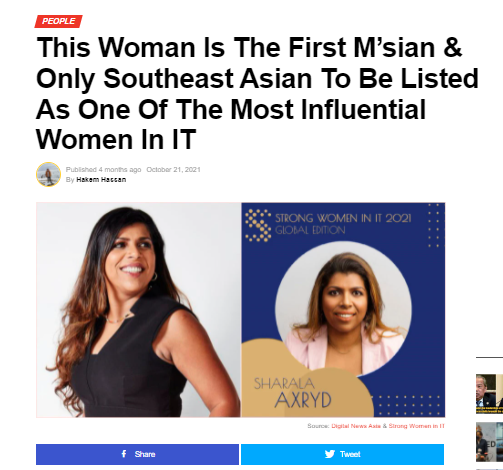 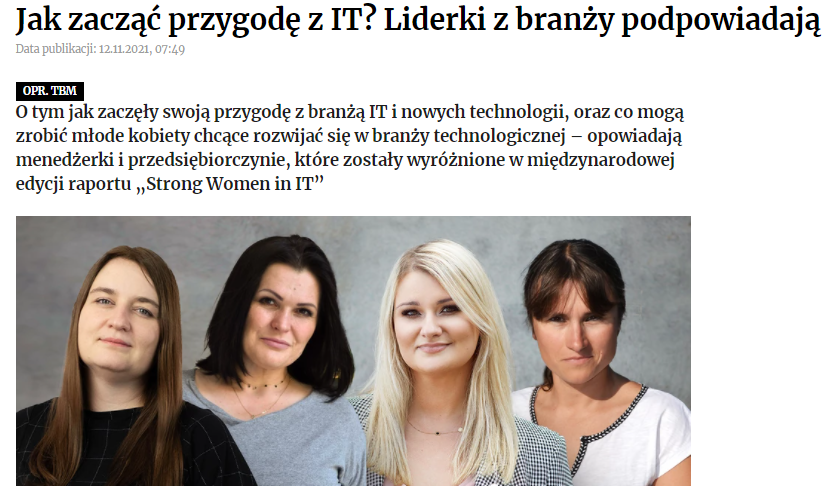 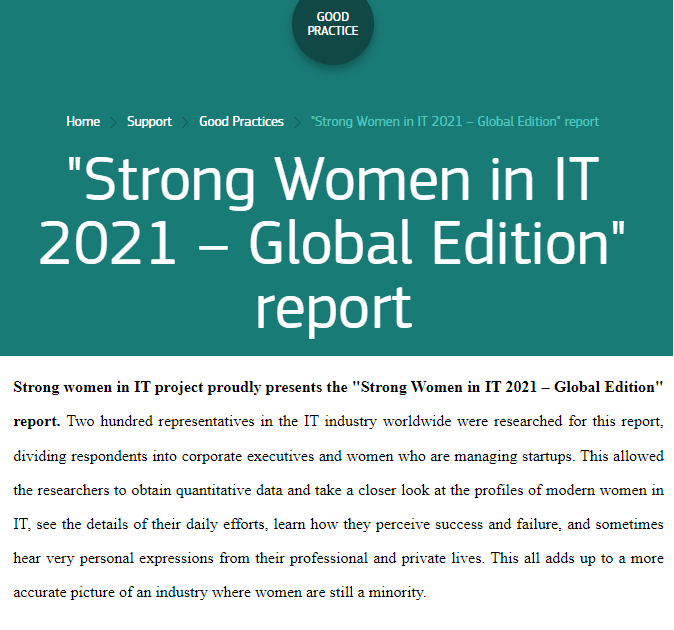 The number of downloads currently reaches a couple of thousands and is still growing. It is a great success for us.

We are proud to inform you that this is not the end of our actions supporting the development and communication of the Strong Women in IT initiative.

Who supported the report’s creation?

Our report would not have been possible without the support of the members of the jury. The panel consisted of tech and business experts from all over the world.

It is their experience, knowledge, and accurate suggestions that influenced the final version of the report.

Very meaningful support was the help of our community partners. During this edition, we have established cooperation with 16 organizations all over the world.

They helped with our actions and wanted to present the successes of the tech industry women with us.

The work with the report has been ongoing since May. It took that much time to invite women to take part in the report, gather the responses and materials, analyze the results, prepare the data, finalize the design, and promote the project.

We are very happy, not only with the increase in the number of women that have participated in our report but also with the hundreds of nominations that have been sent to us. It is a good sign – women are starting to be proud of their achievements and others are noticing their successes.

We hope that by reading this report you will better understand how many wonderful, competent, and persistent women build the new tech world every day. We hope too that you will find your own role models that will help to inspire others.

If you have not had a chance to read the results of our work yet, then we invite you to download it from the website: https://strongwomeninit.com/en/.

Let’s create something together!

You’ve got an idea for a project?
Do you want to talk about cooperation opportunities?
Contact us!

Check out our projects

Do you want to know more about our activities?
Read our Case Study section, which illustrates our work even better!

This website uses cookies to improve your experience while you navigate through the website. Out of these, the cookies that are categorized as necessary are stored on your browser as they are essential for the working of basic functionalities of the website. We also use third-party cookies that help us analyze and understand how you use this website. These cookies will be stored in your browser only with your consent. You also have the option to opt-out of these cookies. But opting out of some of these cookies may affect your browsing experience.
SAVE & ACCEPT